This is what set Modern Frontends apart so starkly from the rest.

The first red flag went up for me when I agreed to do a workshop and the tickets were priced at around £600. I spoke to the organiser Gen Ashley and mentioned that this was far too high a price. I should have pushed this more, but after a short discussion I figured, it's her conference, she's the organiser, I'm sure she knows what price point to aim for.

A couple of weeks before the conference I went online to check the schedule and couldn't find anything. The conference was scheduled the week before I moved house, so knowing the exact time and date of my talk and workshop was pretty important. I had a lot to cram into that week to prepare for the move. I emailed on the 6th November to ask whether a schedule was available.

Gen asked for a quick call - We chatted and it turned out no one had booked in to my workshop. I wasn't surprised due to the price. The conversation was friendly and civil, I empathised with how tricky sales must be at the moment and reassured her that I didn't mind at all. She assured me the conference schedule would be up by the 7th or 8th. I hung up feeling comfortable. A little disorganised but nothing serious. Throwing a conference is tough.

Workshop or no workshop, I was happy to come up for the day. The conference was down the road from my parents house. As I'd be staying with my folks, I didn't once ask about accomodation or travel coverage. It wasn't a concern. This was my first mistake. This was not a small conference. 100+ speakers at one of the largest venues in London, with a speakers party on a Yacht and sponsorship from an assortment of big tech companies. I had assumed speakers were being compensated evenly and fairly for travel and accomodation. I assumed wrongly.

I flew to Sweden for another conference and continued checking for the schedule, nothing. The week went by, first the 7th, then the 8th, emails came promising new schedule dates and each time they were missed.

I started reaching out to friends to see whether I'd missed an email. I started hearing some pretty negative feedback. It seemed the majority of speakers were funding their own travel and accomodation as they'd been told the conference was being thrown to support another, smaller, non-profit conference to help support women in tech. This conference also seems to have some pretty big name sponsors so that rings some alarm bells for me.

There were speakers who had originally been told accomodation was covered, but then were told they had to cover it themselves.

Speakers who had dropped out due to lack of communication or lack of transparency around travel and accomodation.

Speakers who were funding their travel and accomodation from workshop sales - only to be told days before flying that their workshop was cancelled and that they would have to foot the bill themselves.

This is absolutely unacceptable for a conference this size.

I saw a few friends mention their experiences on twitter and I commented on them. I felt terrible that international speakers were having such a bad first experience with the community I care so much about. 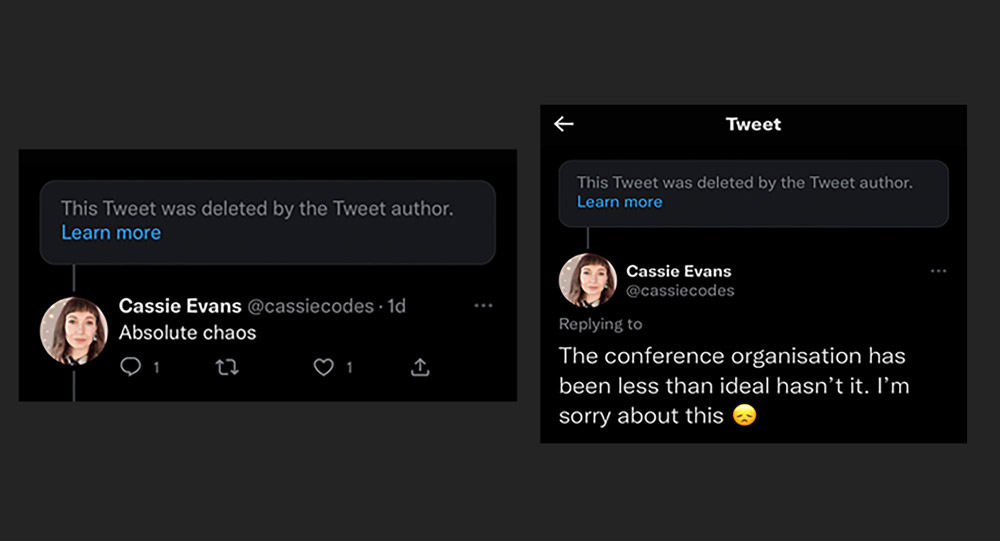 Almost instantly I had a message in my DM's from Modern Frontends.

Hi Cassie, I know you’re not very happy. With us right now, but can you please stop the public pile on? We’re a very small team, dealing with some pressures, bereavement, and it’s really getting the team down seeing the public pile on If you just see the difficult journey for us to get there, you’d understand. Thank you

I felt terrible. I'd been worried about friends struggling with plane fare, accomodation and broken promises but I certainly didn't intend to make an already stressed team feel worse. Especially in the wake of a bereavement.

However - I also felt quite angry that I was being accused of a 'public pile-on'. Until this point, I had taken great care not to mention anything directly from my account. I was purely replying to friends who had voiced valid concerns. I checked the tweets again and saw that they'd been deleted. I reached out and found out that they had received the exact same message, copy pasted, and had been asked to delete their feedback. Things started to feel off.

A bereavement is terrible, but using a bereavement to control the public narrative of your event? Not covering speakers travel and accomodation for a conference of this magnitude? Accusing people of a pile on for voicing concerns? No. I'm out.

I backed out of the conference.

Hope everyone that’s travelled in from overseas has a blast in London!

After posting about this my DM's were flooded with messages from people who wanted to vent about their personal experiences, not just with the conference, but with Gen herself. I am still receiving messages.

The day of the conference I noticed some more tweets regarding the live stream, or rather, the lack of a live stream. People couldn't access it. There was no communication. The conference and organiser were unresponsive. I contacted friends at the conference to see if they knew what was happening. Someone said they had received an email that morning stating a technical issue.

I noticed that the landing page selling remote tickets was still up. It had my name and face on and was still selling 'late' tickets at a bumped up price - despite the lack of live stream.

I managed to buy a ticket for £42 and received nothing all day in return. No communication, No link, No explanation, No apology. Nothing. No tweets from the social accounts at all. All day people were tweeting asking about the stream and they were ignored.

Important to state that the next day, everyone received a refund. However this is still incredibly poor organisation for an event of this scale.

I didn't attend the conference itself so I can't comment on that. But from a friend who attended-

For the price of a £600 ticket, attendees were treated to a single coffee service, with urns of pre-made coffee and tea and a lunch of ‘packet sandwiches’. It was swept away within an hour too, so late attendees or those working over their lunch-break did not get a lunch.

After only a couple of public comments on this conference, a conference I didn't even attend or speak at, I've received a deluge of messages detailing people's personal experiences with Gen Ashley. I'ver never experienced anything like this. Many people are hesitant to speak up publicly.

After hearing these experiences, in all honesty, I'm also hesitant to speak up publicly. I've written and rewritten this article. I've considered not posting it. I've considered deleting her name or writing this anonymously. Logging off and not getting involved.

I've landed on the fact that if we don't speak up about bad actors in our communities - they'll continue leeching off people's good will and doing more damage. Gen appears to be well connected within the tech scene. At a glance it appears that she's doing good work, she seems to be trying to raise up voices of underrepresented folks and women in tech. But days of communication with the very community she is apparently championing and helping have given me more than a little pause.

These are not my stories to tell - but if you're one of the people that has contacted me, I would encourage you to speak up about your own experiences, there's strength in numbers.

Since writing this I've been sent many more messages and have been made aware of Gen Ashley's alleged history of bullying, reputation damage and blackmail. I would urge people again to tread carefully and keep a close eye on any future conference or community involvement attempts.

If you have shared your own experience, let me know and I'll add it to this blog post.